For the love of cranberries

Guests also frequently ask us how cranberries are grown and where they can they visit our local bogs. Cranberries are harvested in the fall- not at a set time but when the cranberries are perfectly ripened. Byron likes to get photos of them being harvested in a Dennis Bog off of 124. One has to drive by daily to see when they are going to be harvested as the time is different every year and not predictable.  Check out a previous blog about where to see the farms.

History of the cultivated cranberry

One needs to go back 8,000 to 10,000 years to understand why our cranberries grow so well here. When the glaciers receded they left behind a great variety of materials in the form of kettle holes. They varied widely in both surface area and depth and were lined with materials of sand, peat, gravel and clay and with that came lots of water nearby. This made for perfect growing of wild cranberries and were quickly harvested by our earliest natives living on Cape Cod.  The wild cranberries grew on low lying , trailing vines much like our strawberries of today. These vines can live up to 150 years and older- still producing fruit. The wild cranberries were used for many other purposes besides eating including red dye, a bait for trapping, leaves as a tobacco substitute, tea, and for medicinal purposes to address fevers, stomach cramps and child birth pains. All of these cranberries grew wild and the harvest never predictable. Fast forward to 1816 when Captain Henry Hall had just returned form the War of 1812. Times were tough after the war and Henry had a farm on Cape Cod in Dennis that he needed to work to support his wife and 9 children. Part of the farm included a swampy area close to the shoreline where some wild cranberries grew which was about a mile north of the Cape Cod Playhouse. The winter of 1816 was expected to be very cold and sure that he would need extra wood for heat, Henry cut down the trees between the bog and the shore. Following the brutal winter, he went out to check on his cranberries and could not believe what he saw- the winter winds had blown in large quantities of shore sand over his bog and the wild vines. He was devastated as he thought he had lost his crop. As spring turned into summer, to Henry’s amazement, his vines began to show new growth. He concluded that the vines and their roots were stronger with the addition of the sand and some varieties appeared to resist the insects better. When his friends and neighbors saw the results they too began to use Henry’s techniques, thus increasing the crops and eventually the number of growers in the area. The evolution was slow but eventually families realized they could make money off of cranberries and support their families.

Hall’s timing fo this new farming opportunity could not have come at a better time on Cape Cod. The ship building business industry in Dennis and Cape Cod had begun to slow down as steam power was introduced. by the mid 1800’s Henry’s experimentation with the use of sand as a natural fertilizer led to the eventual development of the Cultivated Cranberry that we know of today.

1838 was the first year on record of flooding and freezing of the bogs on Cape Cod. This process helped to control insects and prevent frost damage. Also the easiest way to fertilize the vines was to spread sand on the frozen bogs and wait for it to melty in the spring. Even today, sanding is done every few years.

Come stay with us

Book your fall getaway with us and visit a local cranberry bog to learn more about cranberries. We’ll have plenty to share when the harvesting begins. Check out our luxurious boutique rooms here and enjoy our breakfasts and tea that frequently includes cranberries grown on Cape Cod. 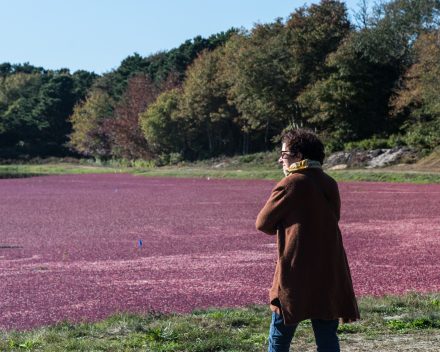 We frequently walk Harrison in the Punkhorns where you will find many deserted bogs. Just love this picture from last fall when we met a lovely gentleman harvesting some of the fruit. There still are many wild cranberries on Cape Cod. 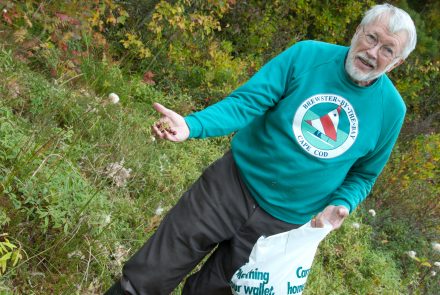