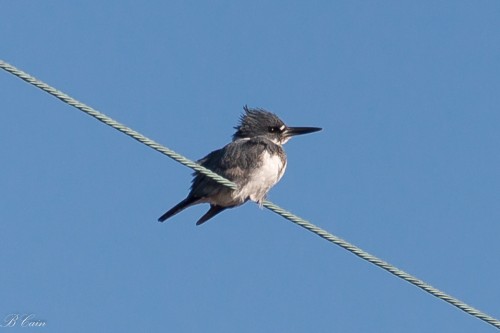 I never really knew much about this bird but knew what they looked like from the pictures at the Captain Freeman Inn. This past summer I would regularly drive from our other inn where we live, Brewster by the Sea in the early morning to help with breakfast at the Captain Freeman. On many occasions when I was crossing the marsh just after the Natural History Museum, I thought I saw a single King Fisher sitting on the telephone wires overlooking the marsh. It then became a tradition to see if he was in his normal perch every day. Our summers are always so busy that I never really had the opportunity to check it out and to see if this really was a King Fisher. A few weeks ago my husband and I were taking a drive to walk Harrison on the beach. I happened to look up and sure enough, there was the bird. Byron is a great photographer and had his camera in the car. We pulled over and quietly walked down the street to get a closer look. Byron’s camera has a wonderful lens and we were able to see that it was indeed a King Fisher. 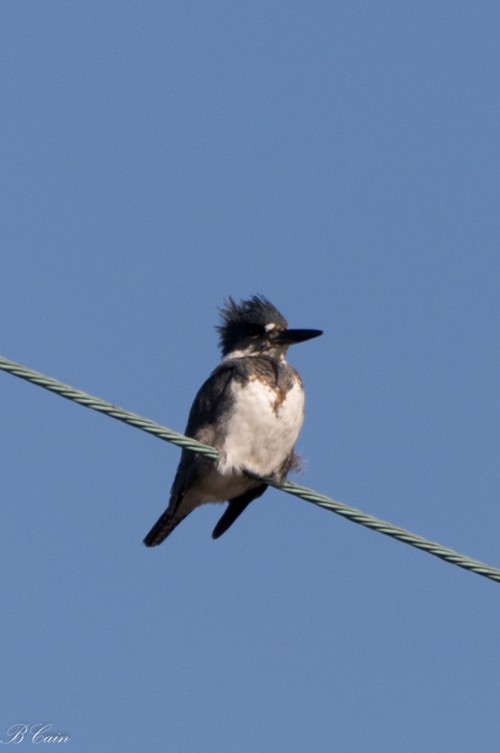 He sat on the line for quite a while and then ventured over to a rock close to the Osprey nest. 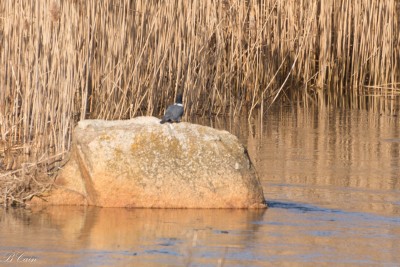 I was tickled to read an article in our local rag, the Cape Codder, where the owner of the Bird Store in Orleans, had a comical answer to a local who asked about this crazy bird. Come to find out they are common and stay on the Cape year round. The local birdwatchers group is also named after this bird. Learn something every day…..

“I really get a kick out of kingfishers because they seem to hate everybody and everything. They are like a flying badger, always in a bad mood. Their call is a loud, harsh, dry, rattle that can be heard at great distances. If you happen to come upon a perched kingfisher, it will immediately take off cursing you and your entire family as it flies away. Some scientists have said an English translation of the kingfisher’s call is “#*&+~*#@!,” but this has never been proven.

Even when they are courting, kingfishers sound nasty. I watched a pair courting a few weeks ago and the whole time they just screamed at each other. It was like listening to a pair of lawyers on a date.

Kingfishers can be found on the Cape year round. They are always near water and, as their name implies, they eat mostly fish, which they hunt from the air. Hovering like terns, kingfishers dive head first into the water with a hugh splash. They then will fly to their favorite perch for lunch, cursing all the way.

One of the most unique things about kingfishers is their nesting behavior. Kinfishers nest in underground burrows like gophers. They make 6-foot long tunnels in the sides of sand cliffs or dirt banks. At the end of the tunnel they build a large, round chamber where they lay their eggs. Both the male and female work on building these long tunnels that can be dug at a rate of a foot a day. In fact, kingfishers were supposed to do all the excavating for The Big Dig in Boston, but that idea ended when they refused to join the union.

So, Joan, keep your eyes and ears open anytime you are near water. You are bound to see and hear a kingfisher, one of the coolest birds on Cape Cod. Just don’t try to make friends with it, because it hates you and there ain’t nothing you can do about it.”

Curious why Captain Freeman named his boat after this crazy bird???? We hear he was quite a character himself.