I have always loved molasses! Even as a kid I remember my mom buying a molasses cookie from Freihofer Bakers….. it was soft and ahhh so good. Later we started making our famed Molasses Cookies at Christmas time to give to family and friends.

Byron recently shared an article from his American Physical Society Publication. I normally would say,  “no thank you”  as I usually find this technical reading boring….it’s a Byron kinda thing! Well in this case I found the article really interesting as it chronicled the events that led to the Boston Molasses Flood in 1919 which was a catastrophic event at the time. The magazine writers found this historical event pertinent to their readers as there was some fascinating  fluid dynamics as to why the molasses storage container exploded.

The owner of the faulty tank was the Purity Distilling Company. At the time, molasses was a vital commodity as it could be fermented to make rum and ethanol and also used to make munitions as World War 1 raged in Europe. Located in the North end of Boston, the tank was hastily built with loose regards for safety  because of war needs. When it was used for rum making the tank was never filled and it was widely known that the tank had a leak as many people gathered the molasses that spilled from the tank for personal use. The disaster struck in the afternoon of January 15, 1919. Witnesses heard a roar, a rumbling sound and then a crash and a loud bang! The tank had just been filled to capacity the day before and had collapsed under the strain, releasing 8.7 million liters of molasses into the streets of Boston.

All told, the flood killed 21 people and injured 150 other. Survivors were taken to a makeshift hospital, although the rescuers struggled to reach victims in time because of the difficulty of wading through the thick molasses. It took weeks to clean up the disaster using salt water to clean up the sticky mess and sand to absorb what was left.

Boston residents sued Purity Distilling’s parent company, the United States Industrial Alcohol Company, which initially claimed the flood happened  because of an anarchists had blown up the tank as an act of terror. Investigators soon found this theory to be false and the company payed the survivors of the victims $7,000 each. After two decades later physicists discovered that gravity acting on the viscous fluid provided sufficient driving force to account of the speed of the molasses spreading quickly in the North End. It was later hypothesized that the fermentation process caused carbon dioxide to build up in the tank, until it’s rivets burst. I have always loved the North End and never heard this story. 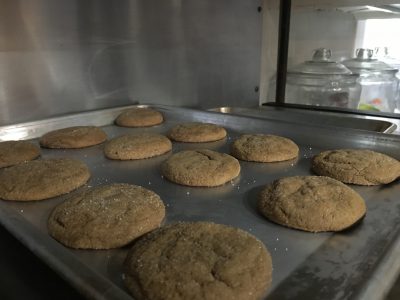 It seems an appropriate time to talk about our Molasses Cookies. We have had so much fun over the years with molasses and this cookie. The recipe comes from an old store that use to be in the Gt. Barrington, Ma called the Jenifer House. It was a huge barn filled with antiques and an old fashion General Store. They sold our Molasses Cookies and at the time they would NEVER share the recipe. We happened upon meeting one of the locals that baked the cookies for the Jenifer House and please keep the secret….she shared the recipe with us. And so the tradition began. When we purchased Brewster by the Sea 14 years ago we knew this cookie had to be our house cookie. We always said that the cookie jar was bottomless unless you raided us when we were sleeping. We have made 1.000’s of this cookie over the years and now that we have just one inn, the Captain Freeman Inn we are revisiting many of our old recipes. This time of the year we call our kitchen the “Test Kitchen” as we are busy testing new recipes for our busy summer season. While new recipes are always fun we will never stop making our tried and true and the Molasses Cookie is at the top of the list.

Consider a stay with us and enjoy our delicious Molasses Cookie. We made some this weekend for our guests andI must confess I ate 3 right out of the oven. 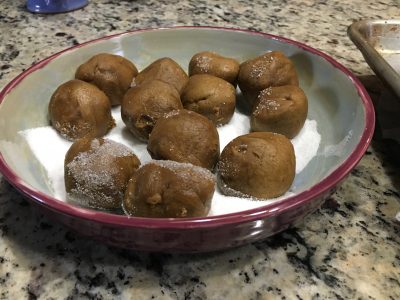 Shown below is the cherished recipe and remember to keep the secret…..:) 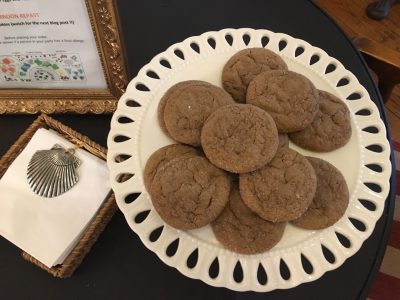 Save Print
Molasses-Cookies at the Captain Freeman and a Flood in Boston in 1919
Author: Donna Cain
Recipe type: Cookie
Prep time:  15 mins
Cook time:  15 mins
Total time:  30 mins
Serves: 5 dozen
This recipe is by far the best cookie I have ever eaten. It makes 5 dozen cookies and freezes well
Ingredients
Instructions
3.5.3226